Those who dabble in recent automotive history will know that a Lamborghini off-roader isn’t a new idea – they had the LM002 back in the 1980s, which stuck a Countach V12 engine into an enormous angular, boxy body that was broadly terrible at everything.

But Lamborghini started out making tractors, so it was dismissed as a mere smudge in their excellent playbook. Fast forward to 2017 though, and the world has gone crazy for SUVs – Bentley has a super-fast luxurious one, Aston Martin have the DBX and Ferrari are even rumoured to be making one...so of course Lamborghini had to join the party once again.

Thankfully they had a concept back in 2013 that was great looking, so decided to go with that – the Urus.

Based around the same platform as the Audi Q7 and Bentayga, the Urus is a proper off-roader with serious capability (Snow, Sand and Mud modes are available) that also handles like a sports car.

It may be expensive, but you’re getting the Lamborghini name and the crazy looks associated with it, along with quite a bit of performance. A 4.0 litre twin-turbo V8 sits under the bonnet putting out 641bhp, which means 62mph can be reached in 3.6 seconds.

Due to the slippery shape it tops out at 190mph too – staggering for such a big beast. Thankfully it also has the biggest brakes ever fitted to a production car to help stop it from such big numbers. Is it pretty? Arguably not. Will it sell? Absolutely!

It’s so rare for a car manufacturer to make a proper rallying homologation special these days, the times of the Impreza STi and Mitsubishi Evo going head to head in the forest at the weekends and on the road during the week are long gone. But not for Toyota – they have created an incredible new hot hatch with unbelievable specs.

To start with, there’s no 3dr Yaris normally, so this GR Yaris (that stands for Gazoo Racing) has a completely bespoke 3dr shell, with a massively wide track which accommodates the bespoke AWD system. Yes, this tiny little hot hatch is AWD and has a manual gearbox.

Then there’s the small matter of the tiny little 1.6-litre three-cylinder turbocharged engine that puts out a staggering 257bhp and 360Nm of torque. Given that it weighs just 1250kg even with the AWD system, that means performance is going to be electrifying, as are the grip levels. Being the Circuit Pack, this version gets a pair of limited-slip differentials, red brake calipers, sticky Michelin Pilot Sports tyres and tuned suspension in the name of enhanced dynamics.

Styling-wise, it’s every bit the rally car for the road with pumped arches, big wheels, huge intakes and twin pipes at the back. This really is one of the most exciting cars to come out in recent times!

These cars come with £50,000 cash included in the price of your ticket. 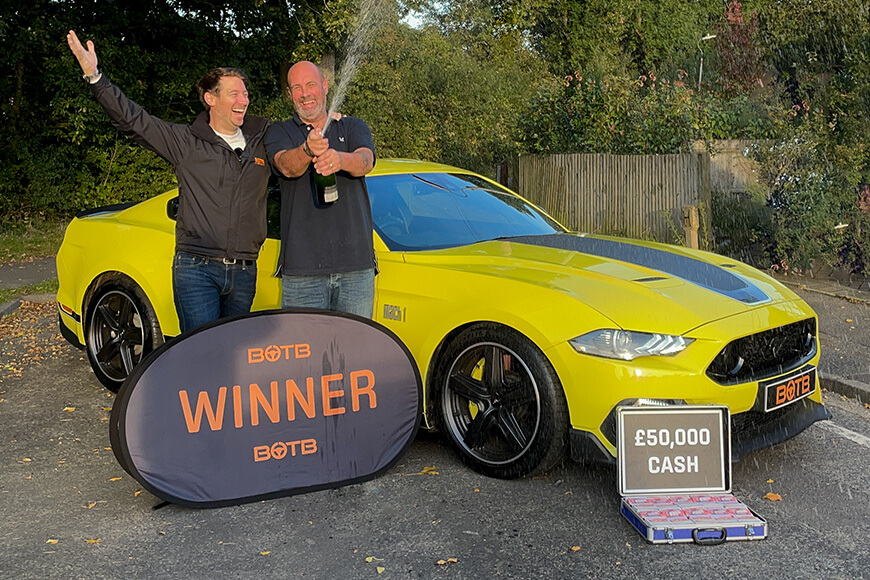