The market for small EV city cars has expanded greatly recently, with offerings from Smart, Skoda/VW/Seat and Mini. But all those are petrol/diesel cars that have been adapted to have an EV model, which inevitably leads to compromises.

Honda has now revealed their contender and it’s got one huge advantage from the off – it’s a ground-up EV design and you can really tell when you look at it. To start with it’s funky – seriously funky! From the cute round headlights and taillights to the short front and rear overhangs, it’s got hints of retro design but looks completely futuristic.

The party piece of the e though, is the interior – which is like nothing you’ve ever seen. A massive screen stretches from in front of the driver, right across to the passenger and you can configure what is seen on each scree, from satnav, to CarPlay, to TV and even a moving fishtank! There’s a big strip of wood trim in front and it all feels totally fresh and new.

Powering the e Advance is a 151bhp motor, which gives more than enough performance in a city car. Battery size is 35.5kWh, which isn’t huge but keeps weight down and allows for a WLTP range of 125 miles, so realistically just over 100 miles in the real world.

Tech is big in this small car though – the interior for one, but there are also extra screens in there for the mirrors as they are cameras as standard. There’s also 100kw DC rapid charging capability and every bit of tech you could imagine for driving – auto braking, adaptive cruise, auto lights etc.

As an extra bonus, the e has a turning circle of just 4.3 metres thanks to the motor being at the back driving the rear wheels – that’s a third less than a London taxi!

If you want a small funky city car – the Honda e is the car for you and you can win one here in the BOTB Competition!

This prize includes both the Honda e Advance and £20,000 in cash. 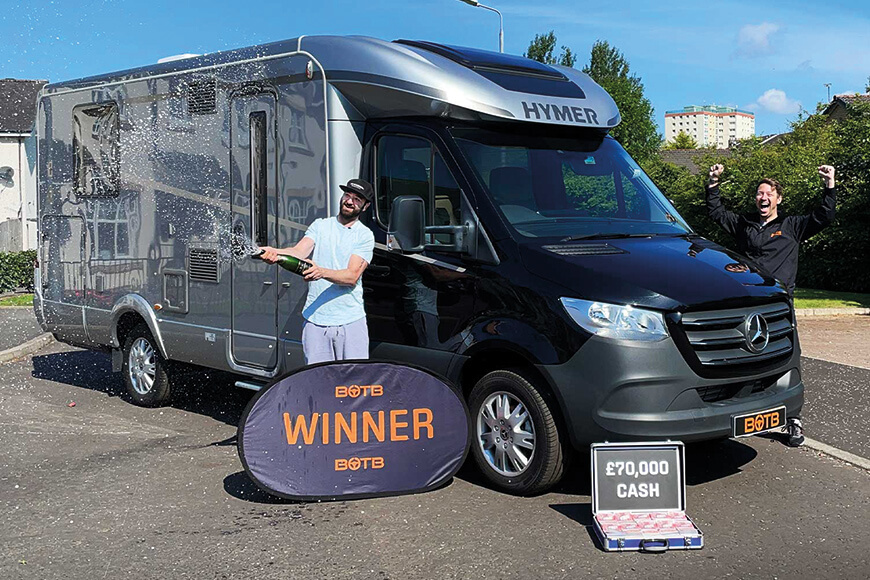